skip to main | skip to sidebar

GREEK NAVY'S HELP IN THE WAR

ONLY ONE SHIP SUNK BY ITALIANS

FROM OUR NAVAL CORRESPONDENT

Some hitherto unpublished details of the work of the Royal Hellenic Navy during the war were given to representatives of the Press in London by Rear-Admiral Gregory Mezeviris, of that service, formerly in command of the Greek Fleet. After referring briefly to the treacherous nad unprovoked Italian attacks on their ships while Greece was still a neutral -in which the old training cruiser Elle was sunk while taking part in a religious celebration in one of the Aegean islands- Admiral Mezeviris described how the whole active fleet, which consisted only of 10 destroyers, was intact and ready for action by the time Italy threw off the mask nad invaded Albania..... 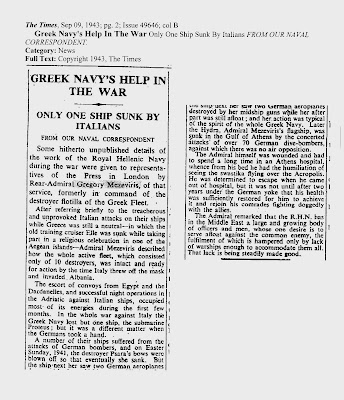